Ultrasound is used routinely for monitoring the health and wellbeing of both mother and child during pregnancy.  It is an invaluable tool used by GP's and Specialists to monitor the growth and progression of your developing baby.

Ultrasound techniques can be used to see the inside of the heart to identify abnormal structures or functions.  The ability to measure blood flow through the heart and major blood vessels is also diagnostically important and is a routine non-invasive procedure.

High resolution ultrasound imaging allows for real-time viewing of tendons, ligaments, muscles, and nerves throughout the body.  Real time imaging of tendons, ligaments, and muscles allows for dynamic evaluation.  Musculo-Skeletal ultrasound can be used to identify tendon and ligament tears, inflamed bursa, compressed nerves, cysts, and fluid within a joint.  Musculo-Skeletal ultrasound is also used to guide therapeutic injections such as for needle placement into joints for aspiration or injection.

Ultrasound Elastography is a specialised ultrasound procedure which is used to differentiate between uncomplicated steatosis (fatty liver) versus micronodular cirrhosis (precursor to cirrhosis).  Often these two conditions look the same on normal ultrasound imaging.  Siemens Virtual TouchTM tissue imaging adds an independent parameter which measures the liver “stiffness” in a non-invasive way.  The well-established Metavir system (Gamel S & Khaled Z 2011) of staging liver fibrosis is used to grade the patients from F0 (normal) to F4 (cirrhosis).

The Siemens ACUSON S2000 and GE Voluson ultrasound machines combine state of the art ultrasound probes with innovative ultrasound applications, resulting in ultrasound imaging systems which deliver the most information from each and every ultrasound examination performed.

The combination of the ACUSON S2000 and GE Voluson represent the pinnacle of innovative technology with workflow enhancing applications and state of the art ergonomic design.  Between the two types of machines available the systems can provide applications across general imaging, obstetrics, and gynaecology as well as vascular and cardiac imaging with efficiency and diagnostic accuracy. 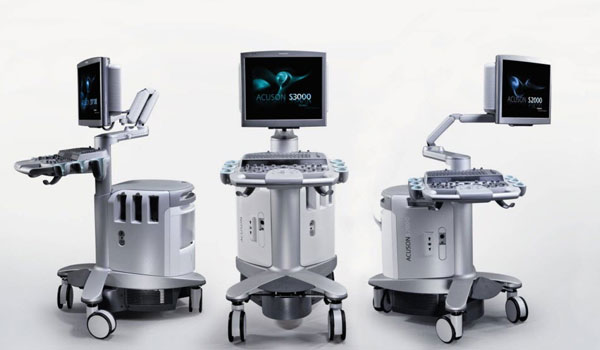 Ultrasound scan Advantages over Other Types of Scans:

The major advantage of ultrasound is that certain structures in the body can be observed without using radiation.  Ultrasounds usually can be arranged and done much faster than other X-Ray or CT techniques.