The Siemens MAMMOMAT Inspiration is a full field digital mammography system.  Gold Coast Radiology has state of the art 3D tomosynthesis capabilities, creating a new method of 3D digital breast imaging that further supports the physician in diagnosing breast cancer.  The Siemens Mammomat Inspiration is well suited to general purpose mammography providing a high degree of comfort and care for the patient, whilst producing accurate diagnostic images with class leading lowest radiation dose to the patient. 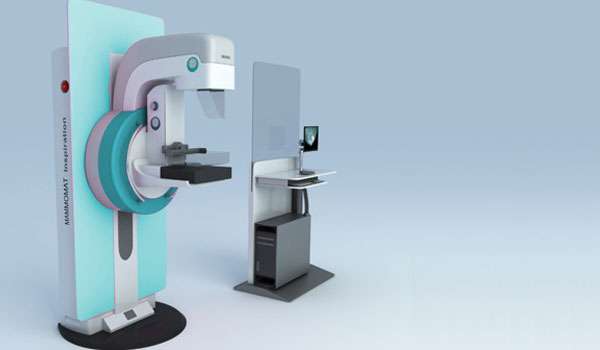 In full field digital mammography, the X-Rays which pass through the breast are recorded on a special detector, which in conventional mammography replaces the X-Ray film.

Different parts of the body and different densities of tissue absorb the X-Rays in varying amounts.  For example, dense bone absorbs more radiation compared to soft tissue such as muscle, fat, and body organs, which allow more of the X-Rays to penetrate and pass through.  As a result of the differing absorption, bones usually appear as white on the X-Ray, while soft tissues appear as shades of gray, and air appears black.  Modern digital mammography systems use a special detector instead of an X-Ray film to measure and record the X-Rays which have passed through the tissues to the detector.  The images are stored as electronic files for review by the specialist radiologist, but may also be printed to hard copy on X-Ray film.

Mammography Advantages over Other Types of Scans?

Digital mammography produces images which are very similar to a traditional film-based mammogram; however, the advantage comes from the ability to manipulate the image electronically.  There is no waiting for film to be developed as the digital images are available immediately, allowing the mammographer to evaluate the quality of the acquired images immediately.  Patients spend less time in the imaging room and rarely need to return for repeat images due to over or under exposure.

Brightness and contrast can be adjusted and sections of the digital image can be magnified to make subtle differences between tissues more evident.  The ability to increase contrast when imaging dense tissue is important as dense breast tissue and malignant cells may both appear to be white on a film mammogram.