The Norland XR-600 Bone Mineral Densitometer and Hologic Bone Mineral Densitometer are well renowned world leaders in the provision of Bone Density scanners.  Standard scan sites include AP (antero posterior) Spine, Proximal Femur, Lateral Spine and Forearm.  A number of patented technologies make the Norland XR-600 and Hologic Bone Mineral Densitometers invaluable tools in the diagnosis of osteoporosis including maximum reading accuracy and precision which ensures discrimination between varying degrees of soft tissue and bone, the ease of use making the Norland XR-600 and Hologic user friendly for the patient and the radiographer, the ability of the scanner to accommodate more patient conditions (larger, slender etc) and ensuring a more accurate measure of the bone and body composition, and most importantly the ability to acquire accurate bone density measurements using extremely low radiation doses. 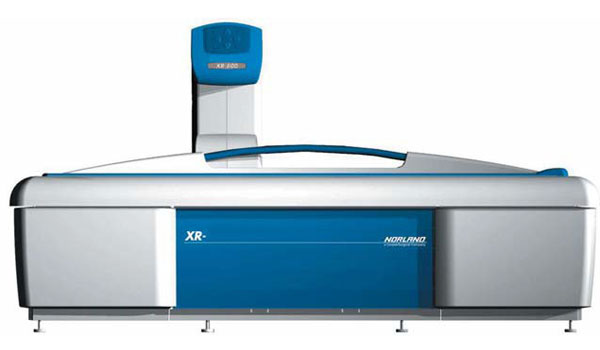 Modern Bone Mineral Densitometers use X-Ray beams of two different energies (dual X-Ray absorptiometry or DEXA). The energy of the X-Ray beams that pass-through bones is absorbed, with the remainder of what is not absorbed travelling and exiting the other side of the body.  The transmitted X-Rays that are not absorbed are detected by the Bone Mineral Densitometer.  The transmitted X-Ray energy per pixel is detected and converted into a density which is measured in grams per centimetre. The number of pixels in the relevant area is added so that a bone density can be calculated for the specific bones in question.

BMD Advantages over Other Types of Scans:

Bone Mineral Density scans are efficient, accurate, and non-invasive, and provide the clinician with a means to accurately measure bone density.  Bone Mineral Density measurements are used to assess and follow up conditions which may impact the patient’s bone density.  The scans are reproducible, and allow for long term comparisons to be made, giving the doctor the ability to track the progress of osteoporosis, or to track the progress of therapy which is designed to halt the progression of osteoporosis.